skip to main | skip to sidebar

An Alma Mater...That Isn't Mine 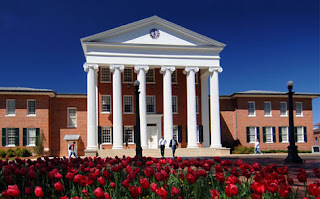 "Ole Miss" = common term for the University of Mississippi, located in Oxford, MS.


Way down south in Mississippi,

Once upon a time, Ole Miss was a combo of (1) where the great Archie Manning played football, and (2) the team that defeated my Crimson Tide at our homecoming on a Saturday afternoon while I was taking Masters comprehensive exams a couple of blocks away from our stadium.  Then when we moved to Hattiesburg, Ole Miss became the object of venomous hatred by, well, a large number of locals.  I started to buy into that myself--recalling that Homecoming debacle--but then I had widespread exposure for a long time (22 years now!) to a considerable number of Ole Miss fans & grads.  Some of them are great friends who have gone far beyond the extra mile for us.  Very kind & gracious folks, even when my team of choice beats theirs.

Then, six years ago, Ole Miss became the school my beloved son attended...and received a degree from in 2010...and will receive another degree from this Saturday.  (In MS, it's very simple: if one wants to be a Pharmacist, one is either going to Ole Miss or going out of state.)


There's a spot that ever calls...

It will surprised no one that James was raised a Bama fan.  While he can still cheer for Bama at times, his colors are clear, and they are Red & Blue.  Not Crimson & White.  "Hotty Toddy" is his cheer of choice; not "Roll Tide."  "Forward Rebels" is his fight song; not "Yea, Alabama."

I'm OK with that.


Where amongst the hills enfolded,...

Oxford is where his heart is; not Tuscaloosa.  Vaught-Hemingway is his home stadium in the Fall, and Swayze Field in the Spring; not Bryant-Denny & Sewell-Thomas Field.

I'm OK with that too.

In fact, I'm beyond OK with it.  I'm very excited for him, and very grateful for Ole Miss!  Just a couple of weeks ago, there I was at Swayze Field, wearing my Ole Miss hat & my "Ole Miss Pharmacy" t-shirt, cheering on the Rebs as they beat Auburn in baseball.  The gorgeous Bama coed with the beautiful blue eyes was there beside me, as was my favorite Ole Miss student in all of the history of the planet.  The next afternoon, there I was w/ the Ole Miss student & 2 of his Pharmacy School buddies.  I was the old dude wearing my "Ole Miss Dad" t-shirt.  This weekend, Lord willing, I'll be there @ Swayze again wearing some Ole Miss gear & cheering on the Rebs.


Where the trees lift high their branches to the whispering Southern breeze,...

Every parent dreams of & prays for his child to have a fantastic, challenging, transforming college experience.  Like James has had at Ole Miss.  In our case, those prayers have been answered in spectacular keeping with Paul's "beyond what we can ask or think" description:

Academic challenges faced & overcome.
I'm not smart enough to get into Pharmacy School, let alone out of it.  James got accepted into their early-entry program, which means he had to maintain a GPA higher than pretty much all of my undergrad semesters' GPAs.  And he did it.  For 6 years (2 of undergrad, & 4 of Pharmacy School).
Professional development

Wow!  James arrived in Oxford six years ago much like most freshmen arrive on their campuses; a bit nervous about it all.  He's leaving having held multiple positions of leadership in various Pharmacy School organizations.  Some of these were elected positions, some were appointed by faculty(!).  He has made presentations to faculty in Oxford, at University Med. School in Jackson, to Doctors at Pine Grove Mental Health facilities nearby here, to Doctors at Parkland Hospital in Dallas.  He has engaged in statistical research with another pharmacist about the efficacy of some heart drug.  So, yeah, Ole Miss has added just a smidge of professional development.
Spiritual Growth
The freshman Bible study group he participated in met weekly in the Grove.  (Yeah...that Grove...the one that's famous on football game days).  He was a faithful church attender in Oxford whose theological convictions led him thoughtfully to move his attendance to another church in Oxford. He was part of a multi-ethnic biblically-solid church during his time in Jackson last year during the dreaded 3rd year Pharmacy School.
Good Times
We parents should hope that our children have such a great time in college that they stay there, rather than heading home the moment their last class of the week lets out.  (Aside: Parents, if you DON'T hope that, and if you insist that your child be home every free moment, I URGE you to think through the impact you're having on your child's personal development!) James has done that, even as one who loves home and loves his family & friends down here (Oxford's just over 4 hours away from here for those who don't know).  He LOVES Ole Miss Sports, and is a faithful attender, even if that means driving up from Jackson for a game.  And he has learned to enjoy a game whether the Rebs win--which they did a lot of during his time in Oxford--or whether they lose--which they've done a lot of these last two seasons.  That ability is sadly lacking today in so many sports fans of various allegiances.  On top of that, he has made deep, abiding friendships  up there that will remain for life.  On top of that, these are the types of friends every parent desires for their children; folks who either are or will soon be contributing to society in meaningful ways.
Love for the Town
Oxford is one of Lisa's & my very favorite places in the country to visit.  Fantastic small town, picturesque, lots of history (the church James attended up there was founded in 1831, & moved to its present location in 1844), a considerable amount of arts & culture (On our most recent trip there, we visited Faulkner's home), and of course, a number of just great eateries.  James can easily imagine himself living there in retirement, attending every Ole Miss sporting event, every play, speakers on campus, concerts,...I can imagine myself doing that too, actually.
Career Path that will allow making a difference
Simply huge.  James has accepted a job as a pharmacist at University Medical Center in Jackson, which is a very solid medical facility where the University's medical school is located.  Early on in Pharmacy School, James decided his passion lay in clinical pharmacy, dealing with patients.  Several years later, he's launching a career oriented exactly in that direction. 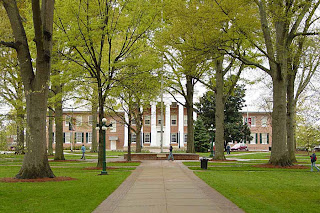 There Ole Miss is calling, calling,...

It's not my alma mater.  Mine will always be located in west Alabama.

But I am VERY fond of the place nonetheless.  I sent my treasured son up there 6 years ago as a nervous & excited high school grad.  Ole Miss has made him a man who has already accomplished much, and whose career path & trajectory are so great in terms of helping people and contributing to society.


To our hearts fond memories

Ole Miss grabbed hold of my son's heart six years ago.  I predict Ole Miss will not let up its grasp on my son's heart for the rest of his days.  Which is, of course, exactly what we all should want for our children.  A place that is theirs by their own choice.

To the University of Mississippi: THANK YOU for the HUGE and lasting impact you have had on my son.
To the School of Pharmacy: I'm in awe.  Thanks!
To the Rebels Sports teams: Thanks for the many fun memories for my son.  And for me.  I hope the football Rebels win almost all their games next Fall & every Fall.  (*smile*)  Seriously, I hope you guys win often & big for years to come.

Hotty Toddy!
Signed,
bb--not an alum, but a grateful parent of one!
Posted by the beach bum at 2:25 PM

Thanks for "re"-sharing this with us Mike. Looks like both our sons are Rebels, in the best kind of way! HOTTY TODDY! Reneé

Pray for Mike - blog about my medical situation